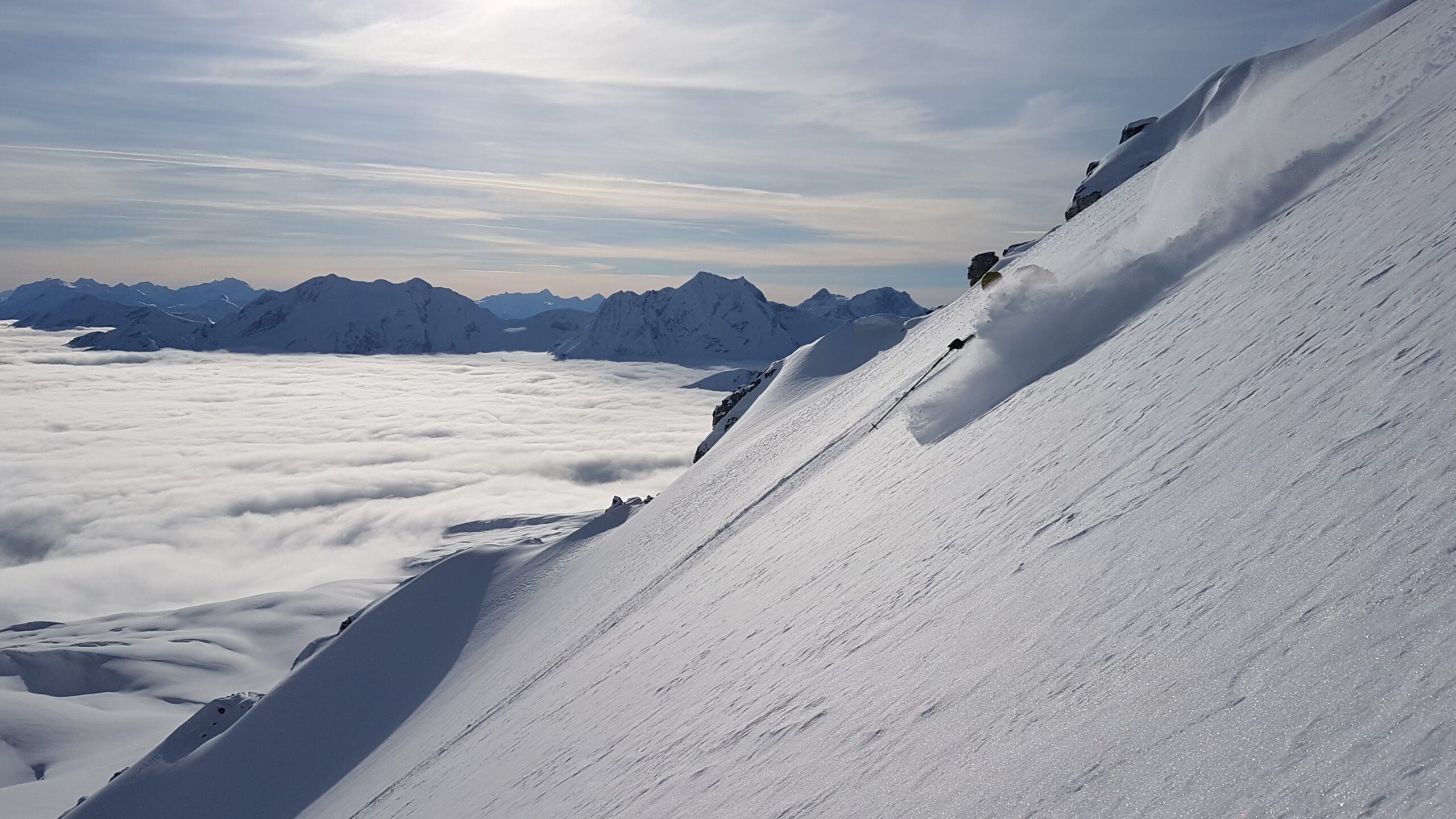 I want you to picture yourself sitting in a row of winter enthusiasts listening intently in an avalanche awareness class or a continuing professional development course. Look left in your row and look right in your row. It’d be pretty easy to go ski touring with one person that’s sitting next to you. You know them. Take a look and think about their qualifications. You know how good you’re going to feel getting out there and how easy it will be to communicate. Now look at your whole row. You’re out there skiing in that big group, with a really big set of qualifications and experience along with what you know about each person. Are you going to have a morning meeting to discuss risk management before you go out? How is the tour going to unfold?

This exact situation occurred in January 2019 when a group of eight planned a ski tour where they were very familiar with both the terrain and each other. The planning consisted of “We’re doing the Z circuit, who’s going?” Nearly every letter in the acronym FACETS (Familiarity, Acceptance, Consistency, Expert halo, Tracks / scarcity, Social facilitation) came in play on that day. The group splintered in the field with everyone still going the same way, just spread out a bit and not traveling cohesively. The group converged at the base of the crux. There was some conversation before going up the slope (e.g. sharing of pit results and some other info); however, the decision-making was tacit vs explicit.

More importantly, not all group members expressed doubts or concerns related to risk management. The decision to go was more or less finalized by one person taking the lead with no discussion of best route up etc.). The decision to go one at a time (a good one) was essentially from experience vs discussion. The feature was visually homogeneous, however, as the trailbreaker shuffled from the steeper slope at the convexity; a thin spot where the wind slab had been scoured a slab released at the tail of the leader’s skis. The ensuing slab was two meters deep on climber’s left (the side where the group was waiting below) and a meter deep on the right (a healthy D2.5 that could have been a D3 with a real track rather than a profile like a hockey stick) and covered part of the approach track.

This commentary expands on “acceptable uncertainty” described in earlier articles. In summary, during avalanche risk management, first we acknowledge uncertainty’s presence, and then reduce it by changing the hazard with explosives, changing one’s exposure in space and or time, changing the objective to one unaffected by the uncertainties. The final steps include communicating the irreducible uncertainty and embedding it in decisions. The personally applied risk assessment question of “Is the uncertainty acceptable?” comes to play here. It is the final filter before acting.

Asking the question as part of on-site decisions will help limit treacherous biases associated with the affect heuristic. It goes a long way towards removing the ego and emotion from the decision process.

So how do you start the risk management conversation with the people in your row when you are out ski touring? Can this all too common group dynamic be alleviated in a manner that leads to better backcountry decisions?

To Acronyms and Beyond

A survey of recent literature revealed a suggestion by Swiss researcher, Benjamin Zweifel. He outlined the parameters for a group process and decision check tool at ISSW 2014 stating: “…such a tool has to be simple enough to be practicable in real life situations with limited time and limited capacity of individuals…” He utilized an acronym to provide a mnemonic for a six-element guidance matrix. Though not ideal for facilitating field discussion, it is an excellent instructional tool for recreationalists learning a framework to assemble and operate as a group. For the all too common situation described in the opening paragraph, a group check tool for risk management must be friendly, effective, and memorable.

HUCKEM is a prompt, a stimulus for a structured discussion in an informal moment. Novices and experts alike can employ it. It is a holistic way to address Roger Atkins’ suggestion: how it is important to create motivational bias towards actions that fit the situation. It captures the axiom that increased uncertainty increases risk.

Though each letter represents a word that we could spend a lot of time talking about individually, they combine into three two-letter concepts: Hazard Uncertainty, Collaborative Knowledge, and Exchanged Mindset.

Hazard Uncertainty elicits thought to what component of hazard has the most uncertainty associated with it. We have an extremely useful framework in the Conceptual Model of Avalanche Hazard that segregates key contributory components; problem type, location, likelihood of triggering, spatial distribution, and destructive size. There are inherent uncertainties associated with many of the different value descriptors used in the conceptual model. Identifying which component of the hazard has higher uncertainty helps keep the perspective focused on where there needs to be the largest margin for error. HU is a prompt for quick focus and prioritization whether sensitivity, distribution, problem type, size, or location has higher uncertainty. Nothing new here, when one is unsure about hazard, one chooses to dramatically reduce or nullify exposure within or to terrain that potentially harbors the hazardous conditions in a manner that avoids consequence if it’s more sensitive, widespread, or larger than expected.

Test results that are reactive or unreactive are on a similar level of uncertainty theoretically. When conditions or results are touchy, uncertainty is typically much lower. Stubborn (and planar) test results leave the observer with the highest uncertainty.

The spatial density and distribution of an avalanche problem and ease of finding evidence (spatial distribution) often contributes to hazard uncertainty. Increased uncertainty may be present when evidence is rare and hard to find, e.g. isolated.

Collaborative Knowledge ties the HU to the EM. It is the expectation that everyone in the group contribute in the hazard discussion and mindset exchange. This does not have to be elaborate, just a quick expression using a Concise, Logical, Explicit, Ambiguity-free, and Resonating (CLEAR) style of communication. Collaborative decisions are a core of the Canadian avalanche risk management framework. One finds them in our operational meeting format, our terrain coding guidelines, and our workplace expectations. Collaborative decisions are consistently better than individual one. No individual gets the expert halo; no one individual sets the objective.

Exchanged Mindset completes the picture, a necessary conclusion to the process. The concept of an avalanche strategic mindset has permeated our culture thanks to its practicality and relevance as a shorthand method to communicate. Exchanged mindset means each individual state their current strategic mindset using either the operational or the recreational model (e.g. open season versus freeride). Exchanging mindsets is a great way to understand what perspective an individual is viewing the situation. It ensures an acknowledgment and or clarification of each other’s ideas on moving forward. Simply put, we cannot huckem as a group unless everyone is on the same page. Embedded in the standardized list of mindsets is an anticipated risk management strategy.

There are just the three points (HU-CK-EM) to drive a quick, explicit, and systematic discussion amongst peers. To keep it effective, we do not want to stand around for any noticeable amount of time. Try it. Just look down your row, side up to your partner, pause at key decision points, and friendly ask, “Dude, can we HUCKEM?” Returning to the January 2019 ski touring situation, any one of the group could have asked it over breakfast and anyone could have asked it to refocus the group at the crux.

Steve Conger began his contributions to the avalanche community with the creation of the first snow crystal card and waterproof field book for recording snowpack profile observations. Steve is an editor emeritus of The Avalanche Review and an instructor for the Canadian Avalanche Association Industry Training Program. He lives in Golden, BC.