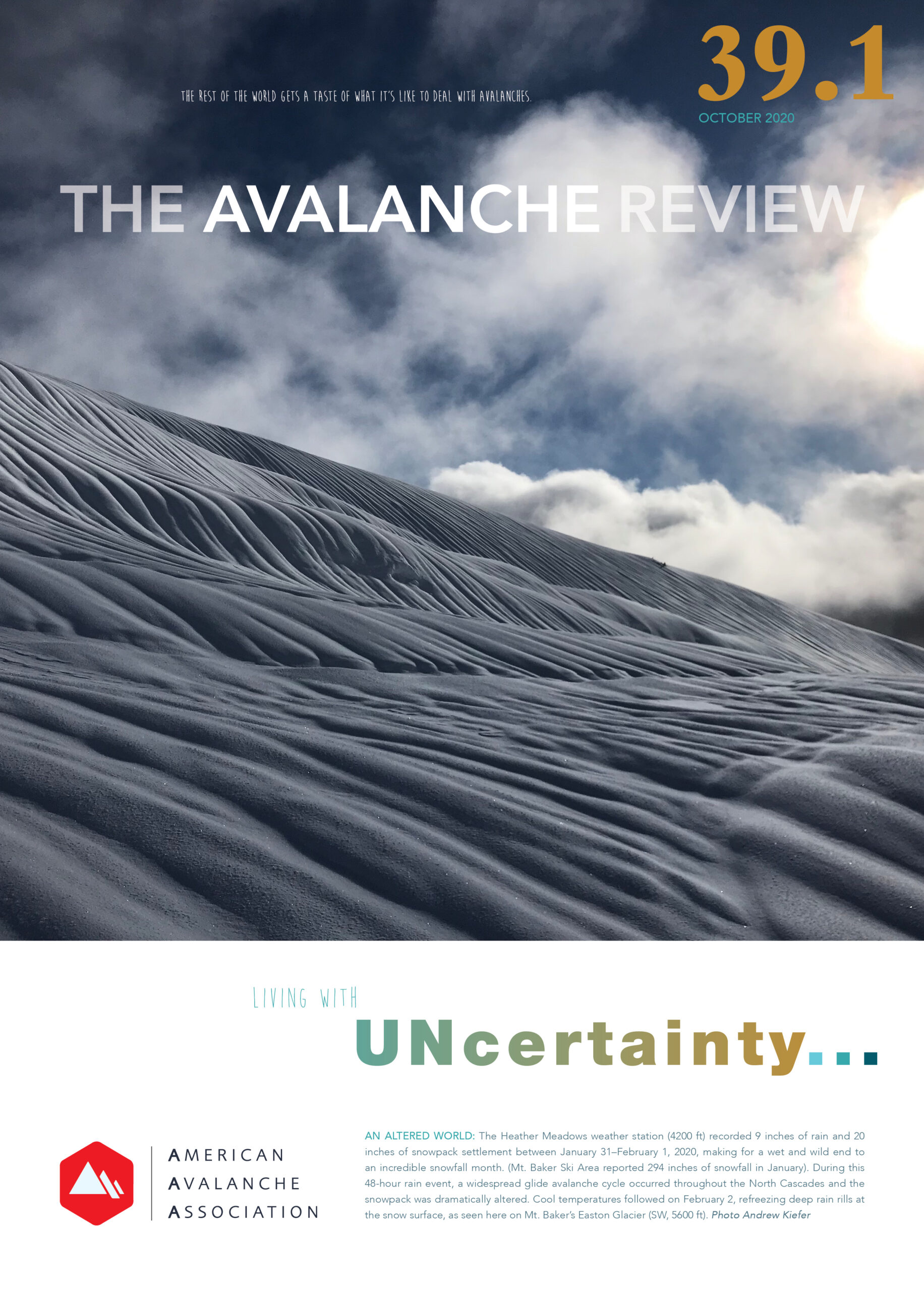 In this piece from Issue 39.1, The Avalanche Review paid tribute to forecasting pioneer Art Judson, who passed away this summer

Once upon a time there were a small number of ski mountaineers employed by the US Forest Service. They were called snow rangers. They are nearly extinct.

They arose early, almost every winter morning, and spent their day protecting the public from avalanches. They studied snow, weather, and avalanche activity, they closed and opened ski runs and highways, they tossed explosives or fired artillery to release avalanches, they issued public warnings. When all else failed and an avalanche struck, they mobilized for the rescue operation.

Art Judson, known to many of us as Jud, started as a pioneer USFS Snow Ranger at Berthoud Pass, working with legendary Dick Stillman, both trying to win a battle against Colorado’s notorious deep slab avalanches. Like all the dedicated few on the front lines facing the avalanche hazard, Jud had his share of the inevitable narrow escapes. Later, he brought his real world, avalanche experiences to the USFS Experiment Station, Fort Collins, where he became a research scientist in Pete Martinelli’s Alpine Snow and Avalanche Project, destined to become the USFS National Avalanche Project. Thus, Jud belonged to the highly select few who in one lifetime could call themselves research scientists and snow rangers.

Jud was a few years ahead of me in all respects. When I started a parallel career at Alta, Utah in 1966, we didn’t have a large pedagogy of avalanche research to build on. We studied with great interest Jud’s growing list of contributions, published in scientific journals and international conference proceedings, especially his work on the properties of alpine snow. Eventually, we performed our own Alta measurements of alpine snow properties with financial support from Pete’s Project, and building upon the earlier research of Pete and Jud.

One of our main Alta problems was a road beneath a nasty group of avalanche paths. Jud took a giant step to help. He traveled to Canada to observe the avalanche forecasting and control program for the newly opened Trans Canada highway across Rogers Pass. Sections of this highway were threatened by avalanches more monstrous than the ones at Berthoud and Alta. At Rogers Pass, Jud met the patriarch of Canadian avalanche research, Noel Gardner, who innovated new methods for evaluating and controlling the Rogers Pass hazards. Jud and Noel hit it off famously. So much so that Noel felt that Jud was the unique person to collaborate with to document for posterity the successful Rogers Pass methods. Together they created a fine publication, revealing methods which found their way into our Alta road program, into my own research, and as an important chapter in the USFS Avalanche Handbook.

Never forgetting his narrow escapes, Jud recognized at the onset of his research career that trying to out-guess avalanches involved a balance of the expected and unexpected, in short, probabilities. New statistical methods were called for, not just for Berthoud or Alta, but methods applicable west wide. The problem is that statistics require data, much more than were available from Berthoud, Alta, and a few other stations. Thus, Jud founded a Westwide avalanche data collection and information network. As prerequisite, he proposed to standardize existing snow and avalanche terminology, and to include new measurements previously ignored. These would be the inputs needed to evaluate the avalanche hazard at a growing number of stations as they came on deck to join the Westwide program.

In 1969, Jud made another trip to Canada, this time to attend the first North American avalanche conference, held at the University of Calgary. Jud presented a paper on his proposed inputs. His presentation was a tour de force. In fact, at the time it was somewhat overwhelming for the audience, as is often the case when new ideas confront a symposium audience for the first time. But in years to come, slowly and surely, his input standardization took hold.

In 1972, the USFS transferred me from Alta into Pete’s Alpine Snow and Avalanche Project at Fort Collins. There I was able to witness the growing Westwide network, and to witness Jud at work, inputting data to the USFS computer, tweaking a complex, evolving model, and examining the latest computer outputs. Did they make any sense? Were there statistical patterns? Did they discriminate the expected from the unexpected? It was difficult research. Jud was open to suggestions. Ideas from others were appreciated and tested. For example, I remember one day suggesting that he experiment changing his input equation for wind direction. He tweaked his model accordingly, but output statistics did not improve. The new snow variable, inputted into Jud’s avalanche model, kept on smothering the other variables. This brought up a related problem. Existing weather models did a poor job predicting the amount of new snow falling in the Colorado mountains. Jud worked closely with meteorologists at Colorado State University to develop reliable models for predicting new snow amounts.

Jud and I became lifelong friends, exchanging family visits in Fort Collins. He maintained a second home in Steamboat where we once stayed to investigate a skier fatality caused by a slab avalanche near the local ski area. We climbed up to the start zone of the slab avalanche , measured snow properties just as we had done independently many years ago at Berthoud and Alta. Other times, we hiked together in the mountains, photographing snow and avalanche phenomena for the USFS Avalanche Handbook.

In 1974, I moved to Canada. We stayed in contact as the years passed on a variety of snow and avalanche problems. After all these years, I believe Jud and I still agree that avalanche forecasting is forever burdened with uncertainty. We prefer to emphasize avoiding avalanche paths, rather than gambling on statistics and probability, or counting on some gizmo to save your life.

Jud gets along well with people. He accepts people for who they are, makes the best of the working relationship. Not mentioning names, that included working with several avalanche pioneers who could be difficult in the extreme. I think they appreciated Jud’s crystal clear, urbane personality, his enthusiasm for snow and avalanche work, just like them, he had worked in and survived the real world of avalanches.

I first met Art Judson in the spring of 1970. I was about to graduate from the Department of Atmospheric Science at Colorado State University, with my best job opportunity at the National Hurricane Center in Miami. But I wasn’t sold on leaving Colorado, and that’s when I learned that the US Forest Service Snow and Avalanche Research Project in Fort Collins (which I did not know existed) was looking to hire a meteorologist. So I made a cold call, and met Pete Martinelli (project leader) and Art Judson.

Jud had a vision (I quickly learned that everyone call him Jud) of establishing a data-gathering program throughout the mountainous western United States (and Alaska). This would be called the West-wide Avalanche Network. Judson and Martinelli were looking for someone (preferably a meteorologist) to set up and then manage this network of weather instrumentation. I got the job.

Jud had visited the Swiss Federal Institute for Snow and Avalanche Studies in Davos and brought home the concept of a network of avalanche forecast centers in the western US. Jud then founded the Colorado Avalanche Warning Program (CAWP) in Fort Collins in 1973. Jud was the head honcho; I was his sidekick. In the next two years, avalanche centers opened in Seattle and Salt Lake City. Central avalanche forecasting had begun in the US, with much of the data coming from weather stations to be installed as part of the Westwide Avalanche Network. These weather stations were located at ski areas and mountain highway passes in the Rockies, Cascades, and Wasatch mountains. (Today there are more than 20 avalanche forecast centers in the US.)

Jud was a good teacher. I would even call him a mentor. I wondered why he picked me for the job, especially when several people with avalanche knowledge and on-snow experience had applied. He told me his decision was easy. With the other applicants, Jud felt he would have to un-teach some false beliefs in avalanche science. With me, he could start with a blank slate and help me to get my avalanche education right. We would spend several years traveling through the Colorado mountains, observing avalanche terrain, skiing, digging snowpits, and making daily avalanche danger forecasts. I’ve always considered myself to have been a lucky guy with a teacher like Jud.

Jud was also one of the team that founded the National Avalanche School. That first school was held in Reno in 1973. I attended as a student.

Here’s an event that stands out from my early, apprentice years of working with Jud. In January 1971, an avalanche near Stevens Pass, Washington, damaged or destroyed seven cabins and caught 17 residents, killing four. Jud and I flew to Seattle and spent the first day in a chartered plane to observe the entire site from starting zone to the destruction and runout zone. The following day we drove to the site to view the damage up close. It was an eye-opening education for me. That evening back in Seattle, I introduced Jud to steamed clams. (I had lived there a few years before). We were in the Seattle area for a few days, and Jud insisted on clams for dinner every night. It was a pretty good bonding experience.

After I received leftover ISSW 2010 funds from Russ Johnson for the avalanche history project (still in the works, stay tuned for details), I made a “hit list” of avalanche mentors to interview: Art Judson was at the top. Summer of 2011 I went to Steamboat and spent a couple of days with Jud. As you can imagine, he was a consummate host and storyteller who quickly became a great friend. Jud gave me intros to several of his contemporaries such as Don Bachman and Ron Perla, and it was an honor to interview them and be included in their scathingly honest email chains. I am already missing Jud’s insight and humor tremendously.

Take-home message: when your heroes retire, don’t let them slink away into the shadows. Ask their opinions and ideas on your pressing questions; they’ll appreciate being included and you’ll gain from their perspectives.

Art Judson received A3 Honorary Membership in 2007. This is the highest award bestowed by the American Avalanche Association. It is given annually or less frequently, to a person who has distinguished themselves by special achievement in the field of snow avalanches.