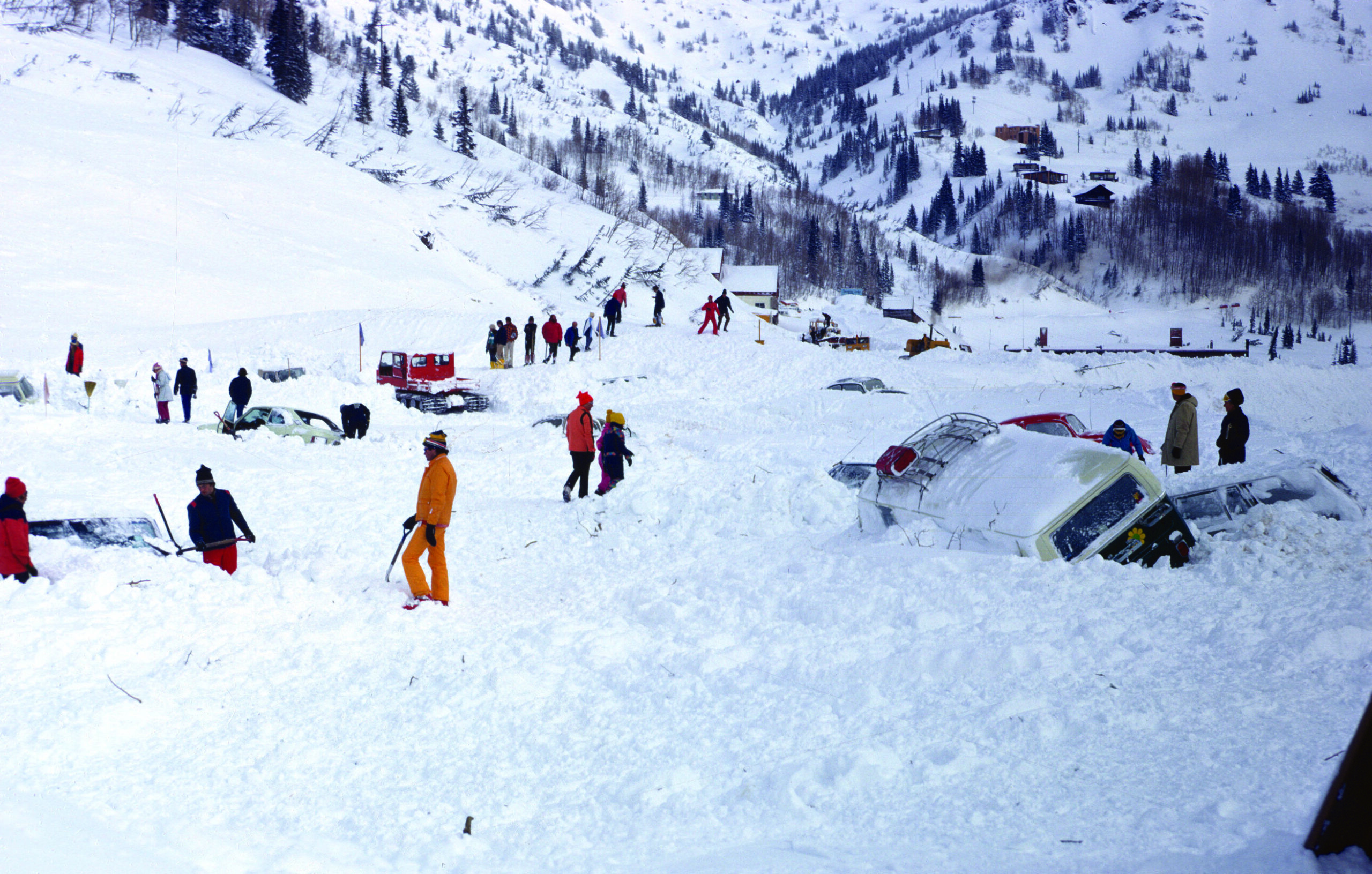 The TAR time machine takes us back to 1973, where a bevy of venerable contributors bring vivid memories of an avalanche cycle in Little Cottonwood Canyon. I am deeply entertained by stories from Peter Lev, Onno Wieringa, Ron Perla, Tom Kimbrough, and honored that Liam Fitzgerald would send us an excerpt from his yet-to-be published memoir. Plus it makes me laugh that these guys are still debating the sequence of events within a 15-minute span 45 years ago. –Lynne Wolfe, Editor’s Note, Issue 37.3

By December 30, 1973, a little over 60 inches of snow, equaling 7+ inches water, had fallen on Alta, Utah. This serious storm was preceded by a thin early winter snowpack which re-crystalized into loose ‘cup crystals’, otherwise known as Depth Hoar, a common situation in the Colorado Rockies, but less common in the Wasatch. Though not unheard of; it is one of the worst possible ‘set-ups’ for winter.

Five feet of new snow resting on such a significant weak layer was not lost on Head Snow Ranger Binx Sandahl, the Lead Forecaster and his crew, of which I was a member. I was the gunner on the primary avalanche control weapon for the Highway and the Town of Alta. The gun was a 105mm (4 inch diameter) recoilless rifle, located on a bunker on top of the north end of Peruvian Ridge. Each round delivered about five pounds of high explosive, and lots of metal shrapnel. This is a military weapon with a huge counterblast out the rear of the chamber to balance out the potential huge recoil. Operating this weapon were myself, Stu Thompson, and ‘Ham Bone’, both from the Alta Ski Patrol, whereas I was USFS. Only Ham Bone was strong enough to lift over his head from storage down in the tower the 10 or so rounds we needed for a full shoot, which was what we were looking at. For us, it was common to blind fire with pre-set sightings on all the targets.

The weather was cold and snowing, but the winds had relaxed, and after three days we were finally able to get to the gun. The old Wildcat chairlift was still in place and could not be operated in high wind, so we waited for this day. Binx felt that a full shoot was needed because the NWS was uncertain how much longer the storm would continue. The idea was to bring down what was up there before the avalanche potential increased even more. We all were very aware of the potential threat to the lodges. For this situation a complete town closure is initiated, no interlodge travel, and during the actual shoot, all guest and employees are to be in the basements. We were ready, so we thought.

As per our gun procedure, after the initial test shot on Hellgate Cliffs, and an ‘all clear’ from Alta Central Radio, we planned to fire all the remaining shots as quickly as possible. This was partly because the gun is up in the weather, the storm, ie, miserable. The targets included Superior, Hellgate, Cardiff, Flagstaff, on through the Emma slide paths eastward to Grizzly Gulch. These are major avalanche paths and in their runouts are the lodges of Snowbird (Mt. Superior only) and Alta. Had Alta Central reported ‘activity’, or worse the Hellgate Lodge has been hit by an avalanche, then procedure required we fire the shots one at a time and call in after each shot to confirm ‘activity.’ Also, before each shot Sara, the central radio operator, would check each lodge to make sure all are in the basements.

Sighting on the blind-fire target 20 feet away, dialing-in for first shot for Hellgate Cliffs, I check in with Sara. She and the radio are located in the basement of the Deep Powderhouse, a ski shop owned by the town marshall. The Hellgate Lodge, directly below the Hellgate Cliffs, is also partly owned by the Alta town marshall. Sara gives the ‘go ahead.’ Fire! Then, as per procedure, I call Sara for a report as to any ‘results’ observed by the Hellgate Lodge. She says “All OK.” So, we proceed to crank the rounds off. We are now dialed-in on Flagstaff Shoulder, a low shot which we always shoot first, before the high main Flagstaff starting zone, thinking to bring down that major Flagstaff path in smaller pieces. The Alta Lodge is directly below the Shoulder. The 105 has a turn handle for a trigger. My hand is turning the handle, and suddenly my mind says “This can’t be right,” but cannot stop my hand from turning that trigger.

We halt the shoot and I call Sara. Silence….and silence. Then the radio explodes with voices, first from Alta Ski Lifts; “We are being covered in a huge dust cloud.” Then finally, Sara; ‘the Alta Lodge has been hit, bad.’ Thus came the all-time record avalanche damage to the Town of Alta in the modern day. The big dust cloud at Alta Ski Lifts came from Cardiff. Prior to that Mt. Superior came down, the largest slide path of all, filling in the Cliff Lodge parking lot. A nearby smaller path, subsequently named ‘Valerie’s’ , hit the Plaza area in Snowbird where there was a work trailer where Valerie and her boyfriend had retreated for some excitement, but not the kind they eventually got. But the most amazing avalanche was brought down by that one shot into Flagstaff Shoulder. The fracture, which turned out to be a five-foot crown, traveled up to the summit of Flagstaff, and on through all the Emma gullies and rounded separating ridges eastward about a quarter mile into Grizzly Gulch. Over 50 automobiles were destroyed with that one shot; some carried from the Alta and Rustler Lodge’s parking lot down and across the Transfer Tow to be deposited in the trees east of Lower Rustler.

We quickly cleaned the gun and headed down to see if we could help. Sara had indicated there were people buried/hurt in the Alta Lodge. There was also a propane leak. I went straight to the Lodge. One young woman apparently did not go into the basement, rather stayed in her room, which had large windows on the uphill, avalanche side of the Lodge. She was looking at a large picture book. When the snow poured in, the book and the window drapes were pressed over her face, allowing breathing room, and saved her. Her room was filled to the ceiling with snow, as was the hallway outside her collapsed door. A Lodge employee also failed to go into the basement, rather stayed in the employees room/kitchen (where the food was) and was slammed against the big cook stove, rupturing his spleen. This of course was critical. Our local brilliant helicopter pilot, Bob Hoskins, came up to get him flying the tree-tops. Unfortunately, a certain self-privileged ‘guest’ demanded to be flown out first, and—hard to believe—a minor fist fight broke out between two guests, both demanding to be flown out first. The injured person was flown out.

This fist-fight was not the only hard-to-believe thing that happened. Now the hard part. Verified by USFS Snow Ranger Binx Sandahl, and also told to me by Sara, the main radio operator, is this: The Town Marshal was standing over her shoulder when I called down to ask for a report from the Hellgate Lodge if any avalanche activity had been observed. She said; “All OK.” Which I took to mean, ‘nothing observed’, so proceeded with the firing sequence. We don’t know why the Marshal did this. There has been speculation he did not want to spread panic, or perhaps since he was an investor in that Lodge there were other priorities. As it happened, the Hellgate Lodge was hit in their parking garage hard enough to cause some damage and shake the main part of the Lodge.

Two notable events occurred when the skies finally cleared. The first was when the ski lifts got their big D-9 cat out to start clearing a path to the lifts building. Alta Ski Lifts has a large parking lot for all the visiting skiers, and the D-9 drove over the acres of smooth snow and parked near the Goldminers Daughter Lodge, perhaps to go in for a coffee. A radio call alerts him that he is parked on top of a car, now very squashed under the snow.

The other one is less amusing, at least to me. On the first blue-sky day we at Alta were visited by two men from the USFS Headquarters in Washington DC. They are standing in their patent leather shoes, long trench coats, golfer hats and sun glasses on the highway just above the Alta Lodge, looking at the Alta Lodge scene depicted in the photo above. We were soon to learn the USFS would no longer be doing avalanche forecasting and control work for Alta, or any ski area. Instead they would provide us with an observer, a so-called ‘Snow Ranger’, to make sure the highway and ski area avalanche control personnel were ‘doing things correctly.’

Binx and I transferred to the Utah Dept of Transportation, which was going from the frying pan into the fire, but that is another story.

Peter Lev has a long history as a mountaineer, beginning back in the day when rock climbing was considered ‘training’ for mountaineering, and that would be the late 1950s. He was a mountain guide, initially employed by Exum Mountain Guides in the Tetons in 1960, and became a partner in the company in 1978. He retired from Exum in 2006 and guided another 4 years, until age 70, for Sylvan Rocks in the South Dakota Needles. Though pretending to be retired (some have said he always has been) Lev currently works with a private long-range weather forecasting company.

Check out Part 2 and Part 3 of this series on the historic 1973 avalanche cycle.