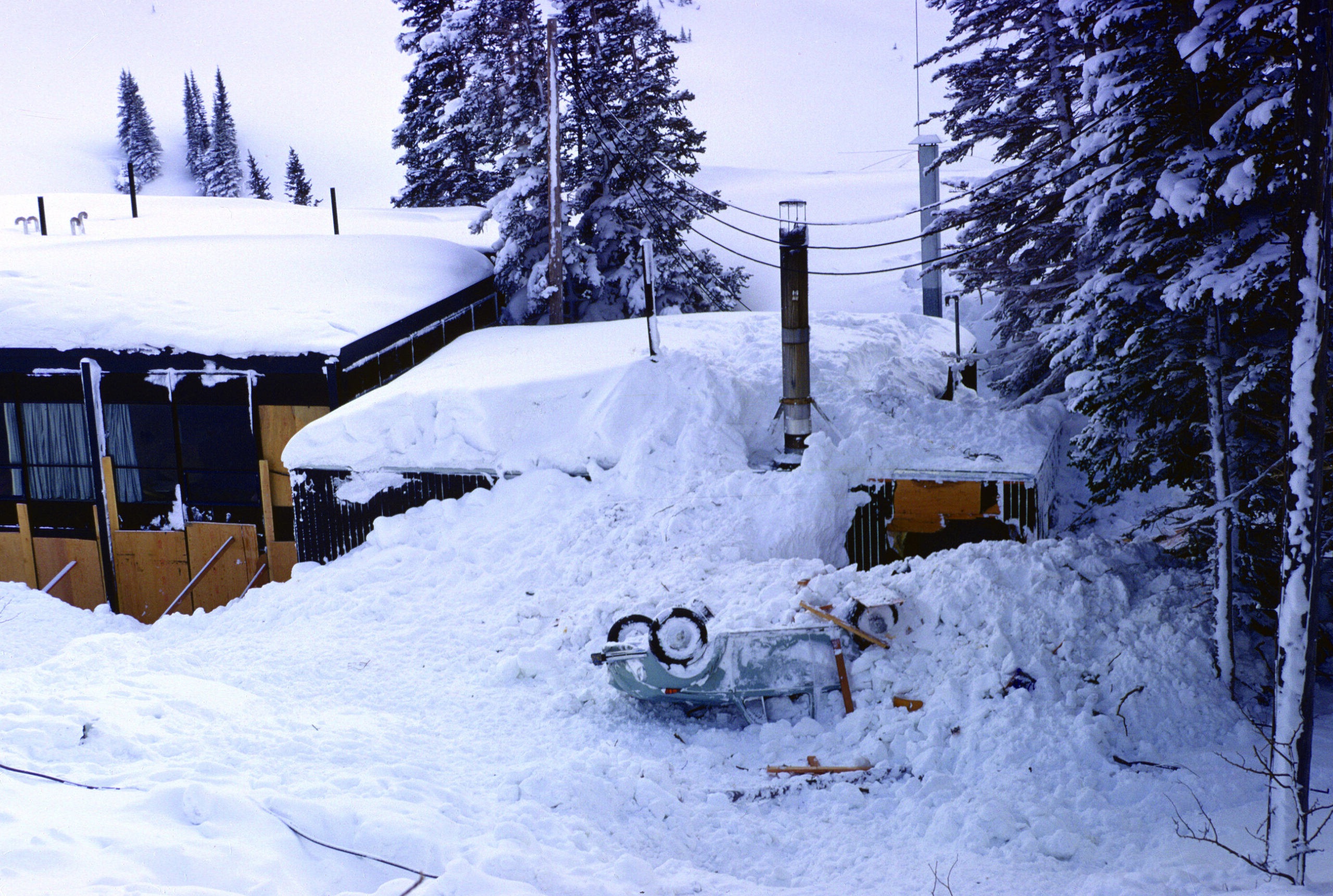 The TAR time machine takes us back to 1973, where a bevy of venerable contributors bring vivid memories of an avalanche cycle in Little Cottonwood Canyon. I am deeply entertained by stories from Peter Lev, Onno Wieringa, Ron Perla, Tom Kimbrough, and honored that Liam Fitzgerald would send us an excerpt from his yet-to-be published memoir. Plus it makes me laugh that these guys are still debating the sequence of events within a 15-minute span 45 years ago. –Lynne Wolfe, Editor’s Note, Issue 37.3

Do you remember when you first came face to face with the destructive forces of an avalanche? My wife Gretchen and her parents most certainly could not forget their first exposure to avalanches. Gretchen’s parents had flown from Michigan to Colorado to meet me for the first time. It was Christmas holiday 1973. A few years earlier, the USFS transferred me from Alta to Fort Collins to work for Pete Martinelli on the avalanche handbook and national avalanche schools, impossible projects if one didn’t visit avalanche threatened areas. There was a big storm in progress at Alta. I didn’t want to miss this one. Here was the perfect chance to show Gretchen’s parents my field of research.

So the four of us drove from Fort Collins to Salt Lake City and waited for permission from Binx Sandahl to drive up Little Cottonwood Canyon which was closed to the public because of the avalanche hazard. We barely made it up the road and I jammed our car into one of the last safe parking places beneath the Alta bunkhouse where we would spend the next three days.

After New Year’s Eve supper, Binx and Peter Lev joined us for a drink. They were deeply concerned about the large amount of new snow hanging over Alta. The forecast was for much more snow before morning. Binx was wondering if he should ask Alta manager, Chick Morton, to start up the Wildcat lift that evening to allow a gun crew to reach the Peruvian 105mm recoilless, and blindfire on the slopes which threatened the village of Alta where people were already confined to lodges. Spirits of snow rangers Engen, Atwater, LaChapelle, Baldsiefen, Lindquist…who had seen the devastation caused by similar Alta storms in the 1940s, 1950s, and 1960s said: “Yes, Binx and Peter, that’s exactly what you must do, bring down the avalanches tonight before they get too big.” My advice was: ”Have another drink.”

Avalanche control began morning of 30 December 1973. Even for those of us who worked many years at Alta, the extent of the damage which greeted us when we skied down from the Peruvian gun was staggering.

Safely in the Bunkhouse, Gretchen and her parents were awakened by war zone artillery. Later, they emerged to walk around debris and wreckage. Truly remarkable that my new relatives were introduced to my life’s work via this once in a decade event.

Ron Perla survived two major avalanches on the Alta ski patrol and as a USFS snow ranger. He coauthored an avalanche handbook, and helped design the USFS National Avalanche Schools. He established snow labs at Canmore, Sunshine, and Whistler where he studied strength, metamorphism, and microstructure of dry and wet snow. He developed two avalanche dynamic models, and is currently working on a third. See: www.snowavalanchearchive.com

Check out Part 1 and Part 3 of this series on the historic 1973 avalanche cycle.