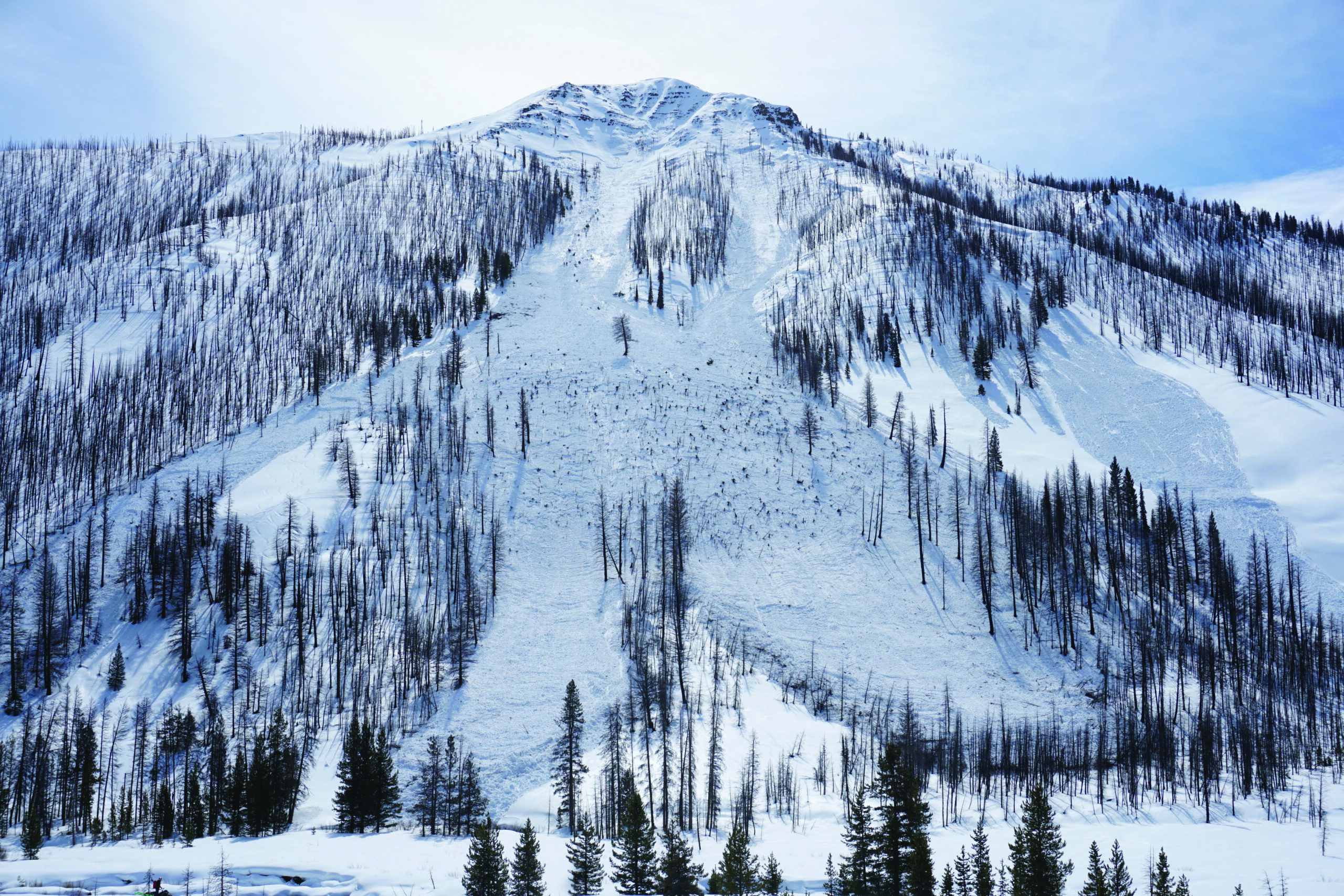 The SAC’s Wood River Valley (WRV) zone harbored a shallow, weak, snowpack with faceted snow crystals from December (December weak layer) through early January 2018. Below 7500 ft., many slopes were devoid of snow. Upper elevation and alpine starting zones contained snow, but several strong wind events scoured many exposed slopes. From early January through mid-February, light to moderate snowfall interspersed with dry, cool, sunny periods formed a layer of near-surface faceted crystals associated with crusts on some aspects (Figure 1). This layer was subsequently buried on 14 February. A storm on 1-2 March deposited approximately 50 mm (2 in.) of snow water equivalent (SWE), producing an extensive natural avalanche cycle on the December and 14 February weak layers. Additional snowfall from 14-17 March caused another round of natural avalanche activity on the 14 February layer.

A southwest flow delivered a warm, wet storm system beginning early on 22 March. In the 24 hours following the onset of precipitation, remote weather stations near Ketchum-Sun Valley recorded 45-65 mm (1.75-2.5 in.) of precipitation. Direct observations of surface crusts in the following days indicated rain-snow levels ranged from 7700-8700 ft. during the storm accompanied by moderate to strong south/southeast winds.

Avalanche mitigation at a nearby ski area resulted in multiple intentionally-triggered, D1 loose wet avalanches failing on near-surface crusts on steep slopes between 7550-9000 ft. However, no substantial debris was observed or reported in any large runout zones near the valley floors by sunset on 22 March. Good visibility in the following days allowed for better observations. As expected, widespread D2-D4 natural dry slab avalanches occurred throughout the advisory area at upper elevations above 9000 ft. Crown depths ranged from one to over three meters. The upper elevation events were clustered on west, north, and east aspects. This natural activity was present in much of the advisory area and was most pronounced in the Pioneer Mountains of the WRV zone. Here, widespread 60-105 cm deep, D2-D3 natural slab avalanches also released in middle elevation starting zones between 7500-8900 ft. (Figures 2,3). This middle elevation activity occurred on west, north, and east aspects but was more narrowly focused on northwest aspects. Many slides occurred in paths where activity has not been observed in the previous 30 years (personal communication: Abromeit, Bachman, Bingham, Gardiner, Kellam). The widespread, natural middle elevation activity was confined to a relatively small area—a few drainages—in the WRV zone. The observed avalanches at middle elevations failed on large (2-3 mm) faceted crystals above an ice crust about 20-40 cm above the ground (14 February layer, Figure 4). The uppermost regions of the starting zones held dry surface snow and did not appear to receive any rain. However, based on field observations, rain fell in substantial portions of many of the starting zones for at least part of the precipitation event. In the lower parts of the starting zones and in the avalanche tracks, the snowpack above the failure layer was much thinner; free water from rainfall had percolated through the slab to the failure layer and bed surface. At one observed avalanche site, the slab changed from a completely dry, 80 cm thick snow mass at the top of the crown to a thoroughly wet, 20 cm thick slab 100 vertical meters downslope.

Cause of Elevation Dependency within the WRV Zone

In exposed upper elevation terrain, the combination of existing snowpack structure, heavy snowfall, and extensive wind-transported snow caused the observed dry slab avalanche activity. At elevations that received only rain during the precipitation event, isolated wet loose avalanches released. The snowpack at these lower elevations was quite thin, and water from previous warm weather and rain events had eroded the snowpack or previously wet all layers. Given the temperature and precipitation conditions, we present three possible mechanisms that may explain the widespread middle elevation avalanche activity (Figure 5):

Given the uncertainty associated with rain-on-snow induced slab avalanches failing on persistent weak layers, we see a need for synthesizing observations and insight from this case study into a hypothesis. We suggest that a combination of the three stated mechanisms—and possibly other mechanisms not yet observed or characterized—caused the fractures. This hypothesis is consistent with the observed elevation dependency of the low frequency, middle elevation activity during this storm (see sidebar for additional discussion).

The frequency of middle elevation slab releases on northwest aspects in a relatively small area in the Pioneer Mountains was notably different than crowns observed above the rain line. Several factors may help explain the observed patterns:

Substantial uncertainty exists as to why more middle elevation, north and northeast-facing slopes in the WRV zone did not release.

Extensive slab avalanching occurred in a single mountain range near the rain-snow line in a narrow elevation band, on a narrow range of aspects, over a relatively short time period. Precipitation type, amounts, and pre-existing snowpack structure produced the rarely-observed avalanche activity in this area. Several factors contributed to the difficulty of forecasting this avalanche cycle:

In North America, many operations use a conceptual model of avalanche hazard (CMAH) (Statham et al., 2017) as a general framework for assessing and forecasting avalanche hazard. The regional forecasting community and individual operations develop decision trees and communication platforms based on the CMAH. These tools work well in the vast majority of scenarios when transitions between avalanche problems are clear; graphics and text describing avalanche location, likelihood, and size sequentially follow the avalanche problem type. However, wet and dry snow and avalanches occur as a continuum, and scenarios not easily sorted into discrete categories (e.g. problems) occur (Figure 6). The effects of dramatic spatial and temporal changes associated with events like the one presented in this article will stress any discrete sorting platform, despite the number of avalanche problem types employed.

The discrete boxes (avalanche problems) are adequate for sorting or categorizing snow and avalanches the vast majority of the time, but how should we communicate when a discrete sorting approach doesn’t work perfectly? One option is to address the uncertainty. Although considering and addressing uncertainty is paramount in avalanche hazard forecasting and public communication (LaChapelle, 1980; Jamieson et al. 2015), public avalanche forecasts do not graphically display it. One way to mitigate this issue is to describe the uncertainty associated with the avalanche problem illustration in the product text. The caveat is that some consumers may view textual admissions of uncertainty as “indicators of ignorance” instead of actionable information (Lewandowski et al. 2015).

Professionals in coastal and some inland mountain ranges regularly face mixed rain-snow events. Southern and central Idaho have not experienced these events frequently, but climate models suggest a higher frequency in the future due to a changing climate (Lazar and Williams, 2008; McCabe et al., 2007; Musselman et al., 2018). We encourage future work investigating wet snow avalanches and developing professional and public communication tools and platforms to handle scenarios as we have described in this article.

Scott Savage is the Director of the USFS Sawtooth Avalanche Center in Ketchum, Idaho. He considers each day that he learns more than he forgets to be a success.

Simon Trautman works for the USFS National Avalanche Center and is the acting Director of NWAC for the 2018–2019 season.

Ben VandenBos is a Forecaster at the USFS Sawtooth Avalanche Center. He has come to realize that his skiing compulsion is a feature, not a bug.