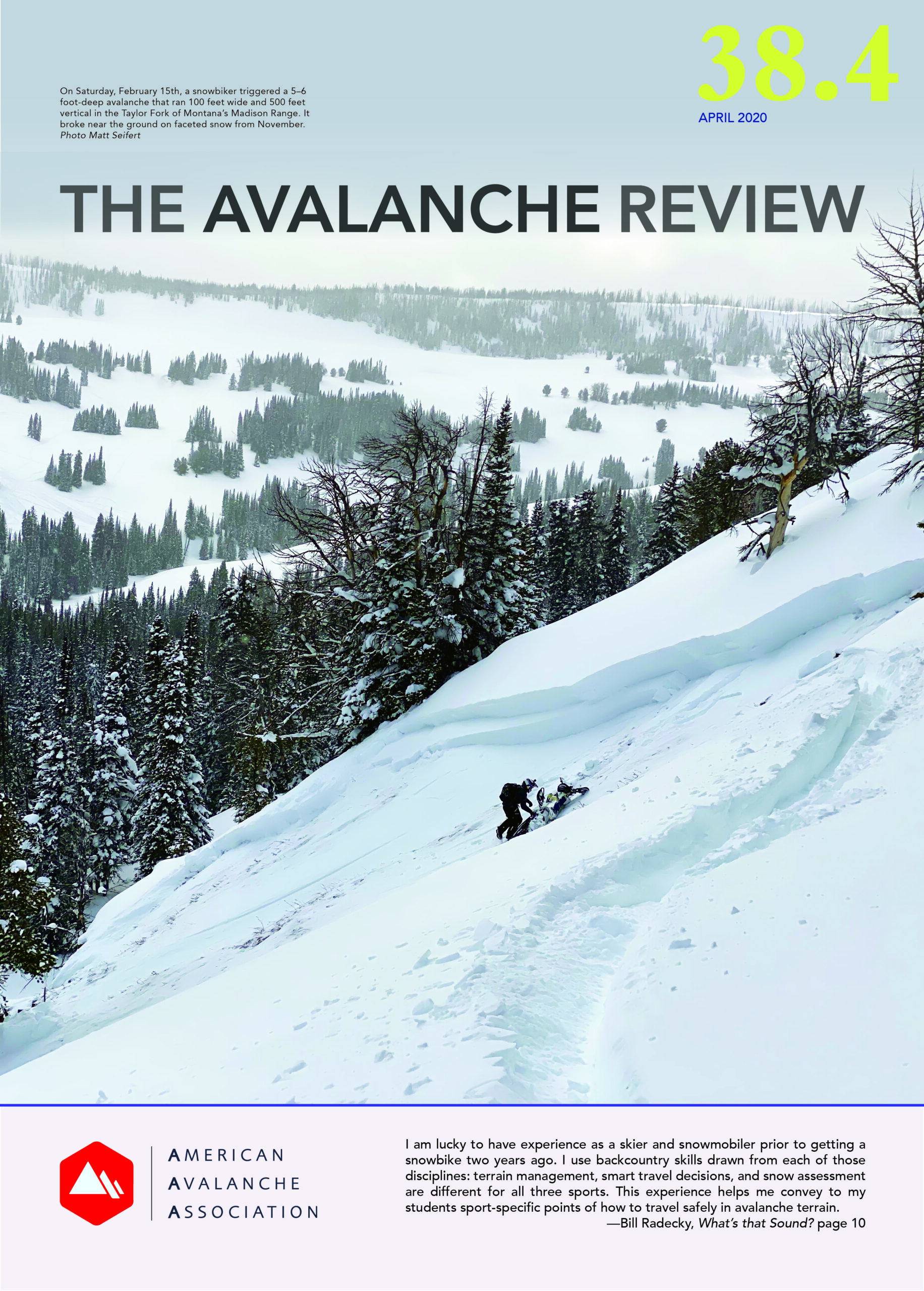 A3 has been working hard to answer a big question: How can we diversify our membership? This is part of a larger conversation within the outdoor industry. In the avalanche world, we’re lucky to have a huge number of female role models, and in TAR 38.3, we posed questions to some of the best and brightest women in the avalanche industry: Janet Kellam, Melis Coady, Wendy Wagner, and Eeva Latosuo.

This series of profiles on the women of A3 has been a long time coming. A3 Board President Halsted Morris initiated the conversation last fall when he told A3 board members he wanted to see more women joining (and feeling welcomed in the ranks of) the organization.

Lynne Wolfe and I made a list of the questions we’d always wanted to ask our mentors—and then we asked them of our mentors. We also gathered the names of other people’s role models, and our list of women to pose these questions to keeps growing. Each set of answers we’ve received has taught us something new and unexpected.

This issue includes Part 2 of our women’s inclusion project series. We hope there will be many more.

Anne has spent over a decade in the backcountry working in avalanche education, guiding, and snow safety. As a social science researcher, she is most interested in the effectiveness of operational risk management practices, education curriculum, and public risk communication products. Anne recently completed a master’s degree working with Simon Fraser University’s Avalanche Research Program (SARP) in Vancouver. This winter, she is excited to be working at Avalanche Canada as a public forecaster in Revelstoke, B.C. and traveling across the border as a member of the AIARE instructor trainer team.

TAR: What was your first job in the avalanche industry? How did you get your start?

ASC: My first job was working as a tail guide for a cat-ski operation. There was a late-season opening due to an employee injury, and I met the requirements with avalanche and wilderness medical training, a resume of personal backcountry skiing experience, and five years of professional guiding as a multi-day mountain bike guide in Moab.

Who were your mentors? How did they challenge you?

John MacKinnon taught my first avalanche course and I distinctly remember thinking, “I love all of the elements of this process and I wonder if I could make a career in this classroom.” I’ve since had the privilege of teaching with John and collaborating on the AIARE instructor trainer team. I am continually inspired by his example as an educator, and I attribute my connection to the industry to his classroom.

Early in my career, I was approached by Kirstin Nelson who was working with the Backcountry Babes. She encouraged me to actively pursue professional development, as there were few women in the local community qualified to work in leadership roles in avalanche education. I think it can be difficult to navigate the avalanche industry in early career stages and to find your place. Having Kirstin outline a purposeful direction and an explicit role for me to fill was instrumental in helping me overcome the bottom rungs of the ladder and in making me feel that my contribution to the industry would be valued if I made the investment.

What’s the most useful feedback you’ve ever gotten?

I was fortunate to work with Tim Brown on a guide team. I distinctly remember Tim prompting me to consider what I wanted in terms of mentorship and how I could take steps to make it happen. It was an empowering prompt that encouraged me to self-direct rather than passively accept my professional development experience.

How can newcomers to the field build sustainable avalanche careers? Have you done that?

I don’t feel qualified to offer advice on a sustainable avalanche career. However, from my experience in the research realm, I think there could be exciting opportunities to better connect the avalanche industry to applied research in fields such as GIS, weather and snowpack modeling, data visualization, risk communication, policy, and decision-making. I think it’s important to give voice to these alternative approaches as guiding/patrolling careers seem to dominate the industry lore. I am optimistic that technological and methodological advances could continue to open doors to creatively navigate theory and practice in an avalanche career, but that’s a biased hope and hypothesis.

How do you fuel yourself when you’re not thinking about snow?

I enjoy bikepacking on the skinniest trails I can link together.

Jenna’s avalanche education began when she moved to Jackson, Wyoming, where she patrolled at JHMR and taught for NOLS. In 2004, she moved south to attend the University of Utah’s Physician Assistant program, and now works in Neurosurgery and Trauma at Intermountain Medical Center. When not working as a PA, Jenna works as a ski patroller at Alta, a guide with Powderbird, an instructor with the American Avalanche Institute, a medical provider on Denali’s West Buttress Route, and a newly-elected Councilperson for the Town of Brighton, Utah.

TAR: What advice would you give your 20-year-old self?

What was your first job in the avalanche industry? How did you get your start?

My first job in the industry was as a professional ski patroller at Jackson Hole Mountain Resort. I interviewed for “any resort job” as a 24-year-old east coast transplant. The resort HR director looked at his list and said, sarcastically: “Well, there’s an opening on the ski patrol,” then laughed (loudly). I did get a job with the race crew that year and skied around with bundles of gates on my shoulder. That’s how I learned the mountain. We had a powder clause on the race crew; if it snowed more than six inches, the NASTAR course was closed and we could free ski. Four years later, there was an opening as a patrol dispatcher. That was my chance, and I jumped on it. I was hired as a patroller a year later.

How have you seen the industry change since then?

Back then, a friend told me that as a woman in a mostly male industry, I should never let it show when something bothered me. Instead, I should use humor as a shield––“fake it ‘til you make it.” I think I’ve changed with the industry. I’m more comfortable saying “I don’t know,” and I think we’ve all gotten better at acknowledging and even embracing uncertainty. The industry talks more now about the important role humility plays in surviving a lifetime in the mountains (though I know the wise older folks have long known this).

Who were your mentors? How did they challenge you?

My oldest sister, Cat, who went west first, is a mentor, as is my dad, who drove to Jackson with her, and was a volunteer ski patroller when we were growing up, just like his dad. All the women on the Jackson Hole Ski Patrol (JHSP), including Jen Calder, Shannon Brown, Carrie Elkins, Kathryn Hess, AJ Cargill, Suzanne, Pam Wright, and certainly all the women I saw working in snow––Lynne Wolfe, Margaret Brady, Rebecca Clough, Evelyn Lees––inspired me.

The JHSP crew taught me to laugh off the small stuff, and also that the people willing to dig you out will quickly become your family (even though I left). They helped me learn more in that job than any other. I’m sure I’m one of countless people to list Don Sharaf, and I’ve learned something from every American Avalanche Institute instructor with whom I’ve worked.

What’s the most useful feedback you’ve ever gotten?

This was advice regarding human nature, rather than feedback: No one thinks about you as much as you think they do. Don’t waste time wondering if someone has misinterpreted what you said or if they were offended by a comment; they likely didn’t give it a second thought and have already forgotten it.

Describe a time you made a bad decision and got away with it—a time you got lucky. What did you learn?

I was skiing the Alta sidecountry with my favorite ski partner. It was my birthday. We were storm skiing––and it was good. We were hiking up for one last run, late in the afternoon, with it snowing a little less than an inch an hour, when conditions changed. The winds ramped up into the forties and fifties, and snowfall increased to four inches an hour. We tried to manage our terrain by skiing a line we both knew well, but cracks started spidering out from my skis halfway down the run.

“Shit, we should NOT be here,” I thought. “We are definitely getting away with this.” But seconds later we were clear, and high fiving as we laughed at how epic the skiing was (pretty epic). We got to the locker room at dark, just as a crew of our coworkers was loading into the cat to respond to a reported avalanche that tumbled a skier and buried her gear. That avalanche was on the same slope we’d skied, but about a quarter mile to the north, and maybe (maybe) a touch steeper. Our friends responding were glad it wasn’t us. I was glad it wasn’t us. Familiar terrain and the late day “get to the barn” feeling let my powder pig take over on that one.

Have your leadership and communication styles changed over time?

Yes. I’ve gotten more comfortable admitting uncertainty, and I’ve learned to listen more. How can newcomers to the field build sustainable avalanche careers? Have you done that? Find a mix of jobs, or one job, that provides a blend of physical and intellectual challenge, with great people and as much powder skiing as possible. I am incredibly fortunate to have a great balance of fun, challenge (physical and cerebral), and skiing, though my new political role has cut into my ski days a bit! It’s important to build in some days of skiing that are just for yourself, with your favorite people.

How do you fuel yourself when you’re not thinking about snow?

I love yoga, reading, mountain biking, and spending time with my husband and our giant dog, Moses.

Check out Part 1 of our series on influential women in the avalanche industry.

Emma Walker is a freelance writer and editor based in Boise, Idaho. She holds a MS degree in outdoor and experiential education from Alaska Pacific University, where she interviewed many women in the avalanche industry as she wrote her thesis on gendered decision-making in Alaska’s dynamic mountain environments. Emma has written for Outside, Powder, and The Dirtbag Diaries, and is the editor of the AMGA GUIDE Bulletin and two volumes of The Snowy Torrents. She is the author of Dead Reckoning: Learning from Accidents in the Outdoors (Falcon, forthcoming 2021). When she’s not writing, you’ll find Emma on skis or a bike, usually with her trusty mutt.